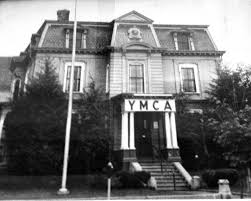 Our Mission Statement
The Mission of our YMCA is to provide opportunities for our members to develop character and leadership, to grow in mind, body and spirit through program participation and service, and to improve the quality of life in Franklin County.

May 22 1939 132 civic leaders signed a charter membership roster.  The Greenfield YMCA was resurrected because of a community need for wholesome recreation brought on by the post WW1 era and the depression.  An office was set up at 278 Main Street and schools and community facilities were used for programming.

April 15 1943 Membership had grown, so a larger site was searched for.  The barn behind the William Washburn house at 451 Main St. was donated.

February 1950 Old P.E. section of the YMCA was opened.  This was one of the finest P.E. facilities in the Northeast.

1969-1970 Building fund drive was started to raise money for the front part of the YMCA (Main Street).

1971 Washburn Mansion was torn down and new front portion of the YMCA was built; $150,000 mortgage was taken out to cover the construction when the pledges came up short.

December 1995 Board voted to kick off a $1.6 milliion capital campaign to be conducted over an 18-month period.  Robert Reid and Lew Taylor are co-chairs of the campaign.

July 1997 Murphy/Davenport Construction Co. broke ground on our YMCA’s 15,000 sq. ft. addition.  This is the first expansion of our YMCA in over 27 years.

January 2000 $400,000 in new endowment principal was contributed, making this the best year for endowment contributions since 1952.

June 2004 Broke ground on the 2nd major expansion in 7 years.  The East Side Addition will have a Pre-School, expanded Nautilus Center, expanded Cardio Center, improved east/west pedestrian traffic in the building plus staff offices and conference room.

June 2005  East Side Addition was built and opened on time and under budget. The ESA added 6,000 sq. ft. of  program space to our YMCA.  A new pre-school, extra Nautilus Center space and the new Farr Fitness  Center on the top floor. Over $116,000 in grant money was raised for this addition.  Kids to Camp Golf Tournament – July 2004 was the 2nd year for our Golf Tournament which raises funds to help send more children from low-income homes to one of our 7 day camps.  In 2004 the tournament netted over $11,500, up from $1,200 in 2003.